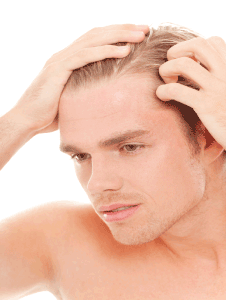 There have been many medical treatments that allegedly grow hair, all the way back to the physicians of ancient Persia, where topical rosemary juice was recommended.  A few of these may work in nutritional hair loss, which is rarely seen outside of starving populations.  Recent research in genetics and inter-cellular communications within tissues has shown promise by providing a mechanism that can reverse the miniaturization process in early androgenetic alopecia in males and female pattern hair loss as well.

We have known for years that cells migrate, or change their location, not only through the bloodstream, but also within solid tissues.  For instance, we know that the hair follicle stem cells that ultimately produce the hair shaft, originate not in the bulb at the bottom of the hair follicle, but higher up, near the junction of the upper and middle third of the follicle.  They migrate from there to the bulb, where they are used to produce the hair shaft.  Recently it was discovered that both fat and hair follicle stem cells migrate through the subcutaneous fat in and out of hair follicles, communicating with other cells around along their path.  Based upon this insight, an Italian company has postulated that if they could move cells from follicles not sensitive the male hormone (DHT) into the area where the hair follicles are sensitive to DHT, they may migrate into the sensitive hair follicles and encourage them not to miniaturize and stop growth.

Get a Free Consultation

DOWNLOAD OUR 10 REASONS Why you shouldn’t delay your Hair Restoration Surgery.

Indeed, they developed a tissue micrografting process, creating an injectable suspension of cells from the donor area scalp on the back of the head, that is not sensitive to DHT.  When injected into areas of the scalp where the hair follicles are miniaturizing, because of DHT sensitivity, these donor area cells migrate into the hair follicles, multiply and signal the other cells to stop miniaturizing and start growing.  The process takes about an hour, involves harvesting a small amount of tissue from the donor area on the back of the head, running it through the Regenera machine that gently separates the cells and suspends them in a solution, which is then injected into the areas of the scalp where one wishes to reverse hair miniaturization and loss.  This tool is ideal for use as an isolated treatment in those with early hair loss, or as an adjunct to hair restoration surgery.  Patients who have Norwood Class 6 or 7, or extreme hair loss within their family history will not have enough donor area to restore the front, middle and back of their balding area by hair transplantation.  Use of Regenera therapy in the back of their head to minimize loss, will allow optimal use of their donor grafts in the front and middle of their scalp.  Regenera, another powerful tool used by Dr. Puig to help people feel better through hair restoration.